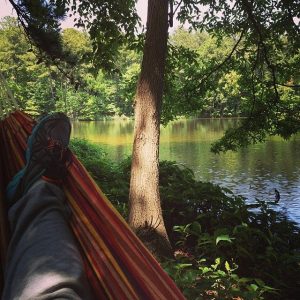 Me turn vegan? No way! Vegetarian? Not a chance!  I love meat.  Steak for me….still mooing.  So pot roast is one of my favorites.  Sunday dinners of my childhood always included pot roast; cooked in my mom’s famous cast iron dutch oven.  I can vividly remember enjoying the tasty meal, including the delicious veges and gravy, in front of the television as we all watched the Wonderful World of Disney or Mutual of Omaha’s Wild Kingdom.   I have taken to the tradition in my own home, much to the pleasure of my man, as he is a carnivore too.  I have tweaked mom’s recipe a bit, but haven’t strayed too far from the tried and true goodness.

Recently, as I planned the Saturday night meal for the TSC, I couldn’t stop thinking about pot roast.  Should I do it over the fire in the dutch oven?  That could be delicious, or disaster!  Since we are all rather new at the “cooking over the open fire” concept, I decided to play it safe.  I was talking with a friend (thanks Karen!) and she suggested I do “Mississippi Pot Roast” in a crock pot.  I was intrigued….anything with that name had to be wonderful, since some of the greatest delicacies ever have been dreamed up right here in our state.  Also, the thought of just plugging in a machine that would do the work for me while I enjoyed the view from the hammock sounded alright by me.

Let me just say….it was the most delicious, tasty pot roast, and was a HUGE hit with the TSC members.  My own twist to the recipe…I added some really tasty veges to the gravy and cooked them for about four hours.  It was the perfect meal to share with friends under a tent at a picnic table in the rain!  Mother Nature doesn’t always cooperate, but who cares?  It’s the food and fellowship that really matter.   Enjoy!

Put roast in a crock pot. Top with dry Ranch dressing and au jus. Slice the stick of butter in small pieces and put on top and add the 5 peppers. Cook 8 hours (all day or overnight).

As mentioned, I took the meat out and wrapped it in foil and added onion, portobello mushrooms, shitake mushrooms, carrots, and new potatoes to the juice and cooked it about four hours.  I also added fresh tarragon and basil from the garden.   Serve on a platter with rice. 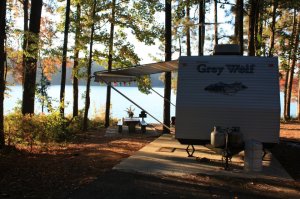 I woke up this morning thinking about bacon…..and salivating.  The only time my man and I cook bacon is when we are camping…unless we have a really good year in the garden, but more on that in another post!

If you have ever spent the night in a campground, you know that the smell of bacon drifts through the park from sun up until about noon.  It drapes itself over the cool morning breeze like a wonderful fuzzy blanket.  The TSC members are usually gathered together mid-morning to share coffee and some early morning conversation about the wonderful time we had the evening prior.  There is some discussion of hangovers and the need for asprin, or a bloody mary if hair of the dog is needed.  The member who is cooking brunch begins to fry the delightful treat and we add our own glorious aroma to the already blanketed campground.

Accompaniments to bacon do matter to our group, even though this delicacy can certainly stand alone.  One fine, cool morning last fall, we had fresh pears covered with crumbled bran muffins, butter and cinnamon.  They were wrapped in foil and cooked directly over the fire.  Add a little fresh goat cheese and some crisp bacon and as we say “that’s got good all over it!”  It was honestly one of the best breakfasts I have ever had.

So, it really isn’t unusual for me to wake up at home thinking of bacon.  It is probably that I’m just ready for the next trip so I can be covered in the warm blanket of bacon.

So, it’s the middle of the day at the campground. Others are off reading, walking,  kayaking or napping. We’ve had our gourmet brunch and the kitchen is temporarily closed. It’s time to paint! Out in the open, and directly responding to nature – ahhhh…. plein air using water soluble oils.

I look across the textured lake at a patch of sunlight deep in the line of trees. A kayaker slowly pauses at the shoreline and then meanders on. I am there and feeling the unusually cool breeze for early June. It’s magical and I’d love to capture that in a small painting… 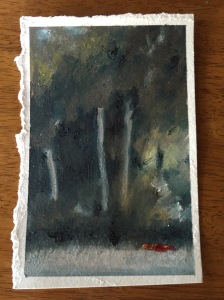 I don’t think there is a soul who doesn’t like to eat….not anyone I have met anyway.  Food brings us together…it unites us, and even becomes something a bit primeval.  If you add a campfire, a few cocktails, and some great stories; the ceremony of eating together as a group becomes something really special.

We started the Traveling Supper Club about a year ago.  A couple of friends had recently retired and bought a camper, although they were seasoned campers from years traveling with their kids.  My man and I have been roaming the roads for about two years in our little 17-footer, so we all decided to gather together on our adventures.  Let’s just say that after many laughs, incredible meals and various others joining us to become members of the TSC, we all agree that the adventure is just beginning.

So when we hit the road from now on, we plan to share our recipes, some bird watching notes, photos, art we have created; share all of our adventures with the hopes of encouraging others to “take their friendship on the road.”  It will keep you young, happy….and well fed! 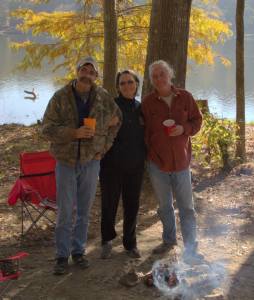